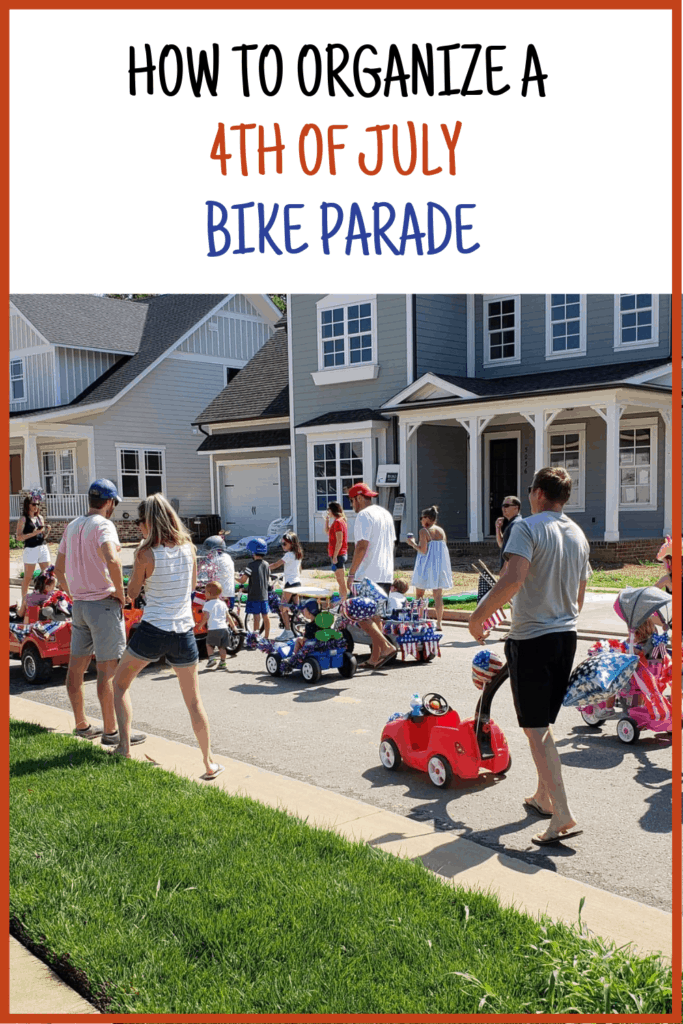 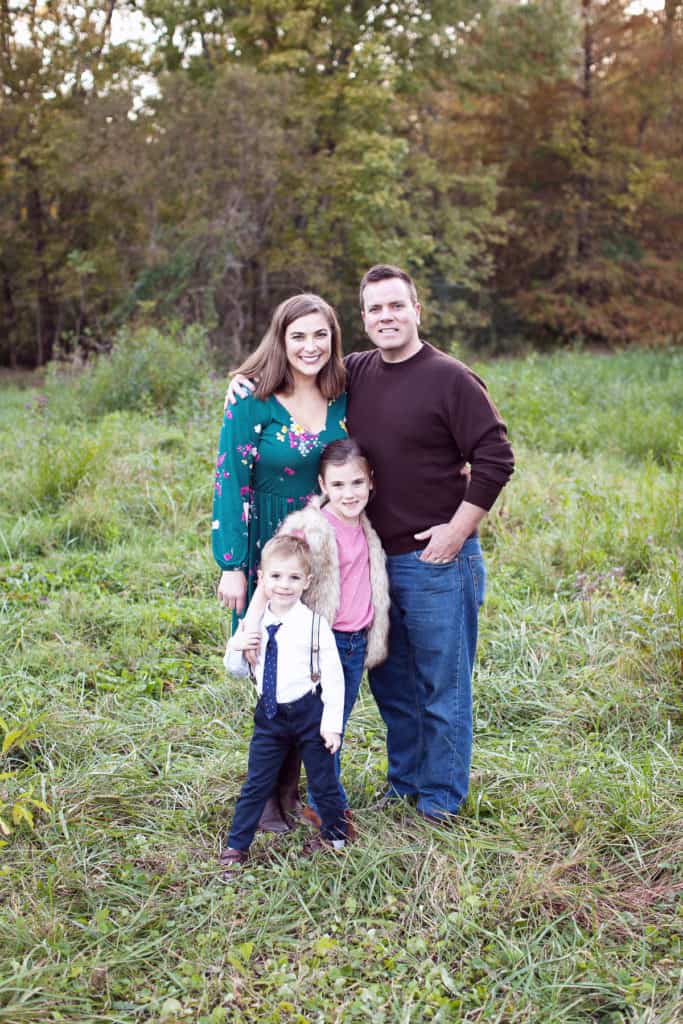 After moving six times in five years, Stacy and her family have a lot of experience starting over in new neighborhoods. With their first five moves, they got so busy settling in and wanting to make their house and yard perfect before inviting anyone over, that when they were ready to start trying to get to know the neighbors, enough time had passed that it felt awkward.

For their sixth and most recent move, Stacy says, “I told my husband that this time, I wasn’t going to wait for others to invite us over or for our house to be perfect before trying to make neighbor friends.”

So she got on the neighborhood Facebook page and asked if their community had a 4th of July bike parade. Stacy’s family had participated in an annual bike parade in their very first neighborhood and enjoyed the sense of community that such a simple event could create. She also knew that by drawing out a large crowd of families, her kids could get to know some other kids in the neighborhood, and she and her husband would get a chance to meet people, too.

People started commenting on Stacy’s Facebook post saying that no, they didn’t have a bike parade, but they were very interested. So she stepped up and planned the neighborhood’s first 4th of July Bike/Scooter/Stroller Parade.

In the weeks leading up to the parade, Stacy worried that no one would show up and that her kids would be disappointed. But then, two days before, she started worrying that too many people would show up. She could just picture big kids running over smaller kids with their bikes or running out of food (a Southerner’s worst nightmare, she says). 🙂

In the end, 10-12 families showed up, the perfect amount of people for their first bike parade. No little kids got run over, and there was plenty of food. Stacy and her family got to meet a lot of new neighbors, and she is now known in the neighborhood as “the parade lady.” 🙂

This post may contain affiliate links which means that if you make a purchase through one of these links, I may earn a small commission. Please see my privacy policy for more info. 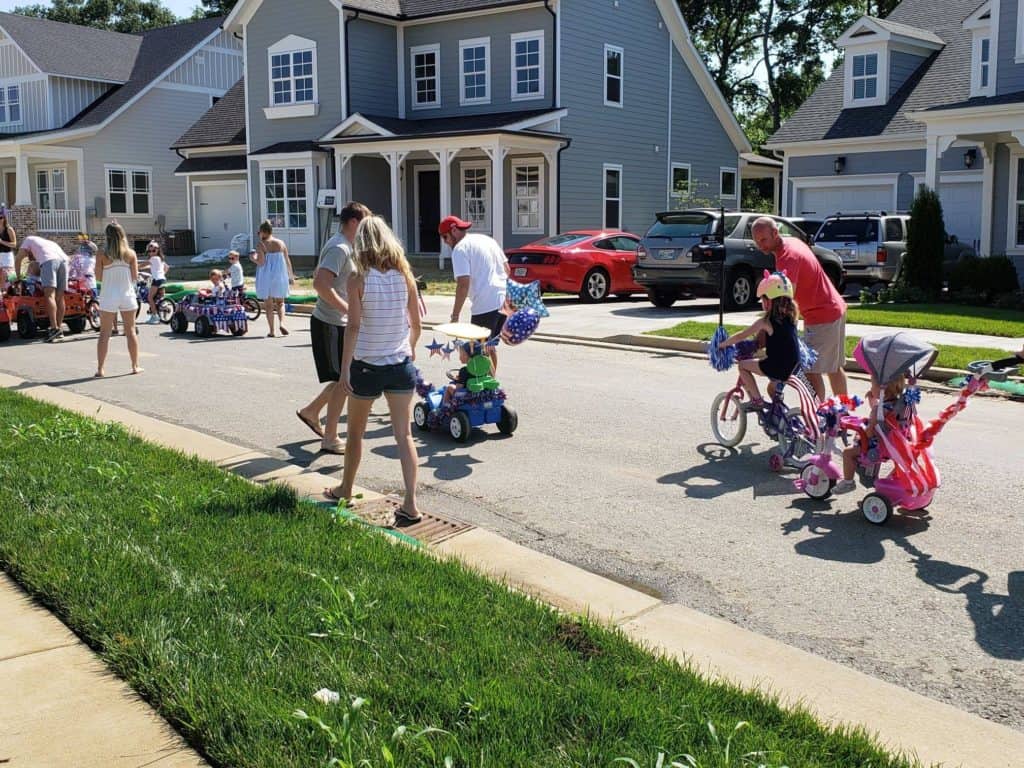 How to Plan a 4th of July bike parade

2. Decide on the details. Where will you hold the parade? If you have a short loop in the neighborhood or a main road that ends at a common area, those are great choices.
What time will you start? If it’s super hot in July where you live, you might want an earlier start, like 9:00 AM. Stacy says it was already pretty hot by 10:00 AM when they started theirs.
Will you add extra fun to the festivities? Some neighborhoods arrange for a firetruck to lead the parade. Some hold bike decorating contests. You don’t have to do anything extra, though, if this is your first time having a parade.

3. Spread the word. Post an event in your neighborhood’s Facebook group or on the Next Door app. Make a flyer with all of the details and post in prominent areas of your neighborhood (at the playground, pool, or clubhouse, if you  have them). Make sure everyone knows that they can decorate their bikes and that there will be refreshments at the end.

4. Welcome volunteers. If someone offers to help, give them a job. Stacy says the most helpful roles would be the Starting Line, Finish Line, Refreshments, and Music. The more people who are involved, the more buy-in you’ll have.

6. Set up some ice-cold refreshments at the end of the parade. Stacy and her neighbors provided water, red and blue juices, bowls of red and blue fruit, and popsicles in coolers. 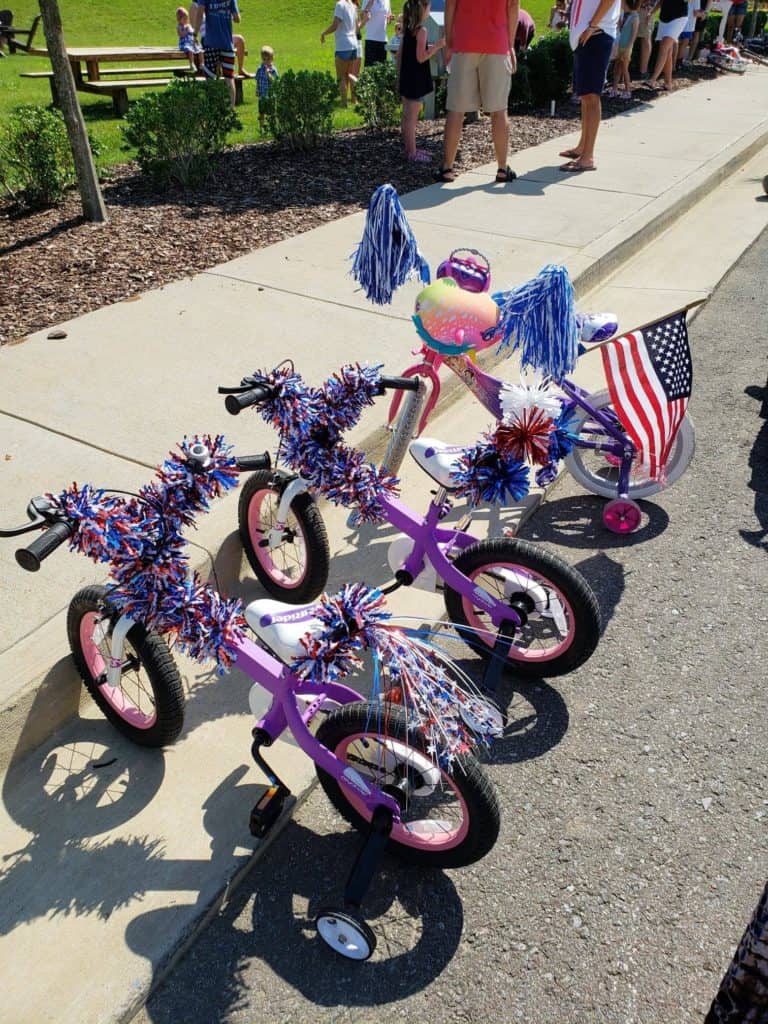 Tips for Your Bike Parade

Here are a few tips and ideas to make sure

Stacy says she found most everything she needed for the bike parade at Party City, the Dollar Tree, and Big Lots.

Whether you’re new to a neighborhood or you’ve lived in yours for 10 years, you can organize a simple community event like Stacy did with the bike parade.

She says, “Sometimes YOU have to be the one to reach out and plan something, even if you feel silly or worry that no one will participate.”

And she’s right — sometimes when it comes to building community, you get out what you put in. Don’t be afraid to be the person who sees the need for connecting with neighbors and steps up to make it happen — just like Stacy did. 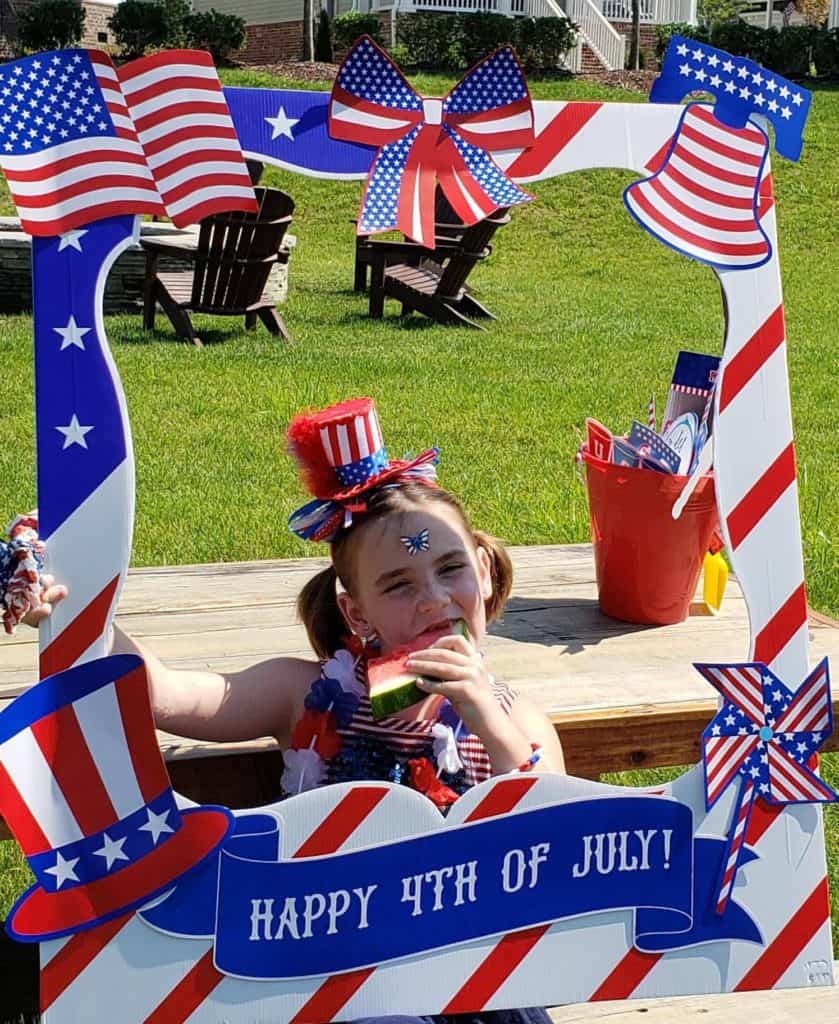