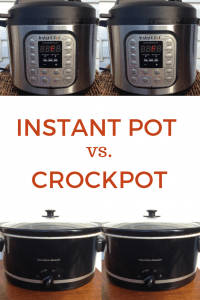 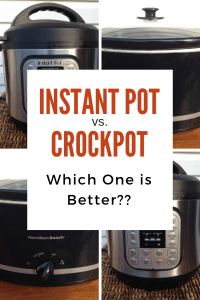 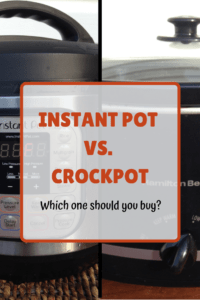 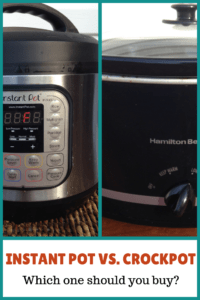 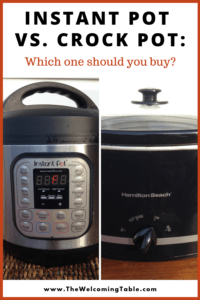 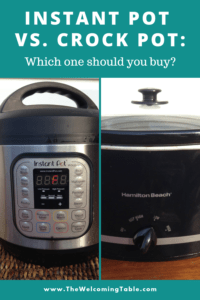 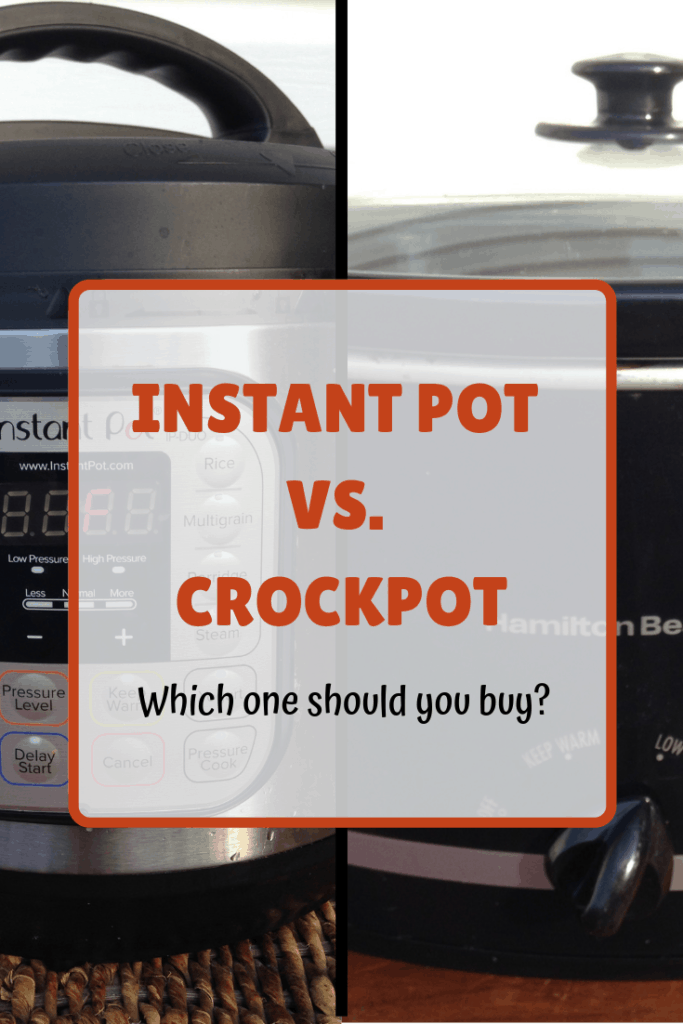 Which one is better: Instant Pot or Crock-Pot?

People in the U.S. have loved their Crock-Pots since they became popular in the 1970s. And for good reason. Who doesn’t love throwing in a bunch of ingredients, turning on the Crock-Pot, leaving the house, and coming back to a fully-cooked meal 6 hours later?

But in the last few years, Instant Pots have burst onto the scene and have gained an obsessive, loyal following. If you know someone who owns one, you may even be tired of hearing about it. But you might also have some questions.

This post may contain affiliate links which means that if you make a purchase through one of these links, I may earn a small commission — at no extra cost to you. See my Privacy Policy for more information.

Today I’m going to compare the Instant Pot with the Crock Pot so you can decide which one works best for you and which one you should buy.

I’ve owned a slow cooker for at least 15 years, and I received an Instant Pot for Christmas 2018. I’ve cooked extensively with each one, and there are things I love about both of them. I’ve used each of them for feeding my family and for hosting large groups.

I know my stuff.

What’s the difference between an Instant Pot and a Crock Pot?

Let’s get the names out of the way first. Instant Pot and Crock-Pot are both brand names. In generic terms, an Instant Pot is an electric pressure cooker, and a Crock-Pot is a slow cooker. The brand of slow cooker that I currently own is a Hamilton Beach, but for simplicity’s sake, I’ll call it a Crock Pot.

Pressure cookers are electric pots whose lids create a super tight seal, trapping steam inside and cooking food quickly (up to 70% faster than other methods!).

According to the Crock-pot website, a slow cooker is an”electric pot with [a] stoneware insert…designed to operate completely on [its] own.” Crock-Pots cook food slowly, over a period of 4-10 hours by trapping heat inside.

Which one is easier to use?

There is definitely a learning curve when it comes to using an Instant Pot. You have to learn about safety, cooking times, and its different settings. The first few recipes you try may feel like trial and error. But once you’ve made 2-3 meals in it, you get the hang of it.

The Crock Pot is definitely easier when it comes to no-fail cooking. Like I said earlier, there’s nothing easier than throwing a bunch of ingredients in your slow cooker and going about your day. If you can read a recipe, you’re good to go.

Which one has more functions?

This is one area where the Instant Pot shines. The one I own has 7 different functions:

I have only used mine for pressure cooking, sauteing, and warming. I actually forgot that it can steam until I was writing this post — I’ll have to try it soon! I use the Saute function all the time to brown meat before cooking a dish or to saute onions & peppers before adding other ingredients. It’s so nice to be able to do all of that in one pot.

I’ve heard people rave about using the Rice Cooker and Yogurt Maker settings, but I’ve heard mixed reviews about the Slow Cooker setting. You’re better off using the Pressure Cooker setting for anything that you’d typically cook in a slow cooker.

A Crock Pot can be used for one thing and one thing only: slow cooking. But it’s really, really good at it.

How long does it take to cook dishes in each?

The Instant Pot prides itself on cooking things faster than many other methods of cooking. If, at 4:00 PM, you frequently find yourself panicking because you don’t know what to cook for dinner, the Instant Pot will cook it up fast — even if it’s frozen. That’s a huge benefit for those of us who aren’t always on top of things enough to set meat out to thaw the night before.

Sometimes, though, the cooking times on Instant Pot recipes can be deceiving.

Most  meals in the Crock Pot take 4-8 hours. Some meals, though, you don’t want to cook for too long or they will overcook (like chicken) so if you work 9-5, you have to be careful to pick recipes that are a little flexible on time (like roast or soup).

Here is a comparison chart:

Which one makes the most varied types of dishes?

When it comes to the Instant Pot, the better question may be, What can’t you make in an Instant Pot?

Here are some of my favorite things I’ve cooked in mine:

Related post:  10 Things You Can Cook in Your Instant Pot (That Are Great for Entertaining!)

You can cook many of the same things in the Crock Pot: beans, soups & stews, roasts & shredded meat. But you can’t make consistently good pasta or rice like you can in the Instant Pot, and it’s not recommended to put in frozen meat since you’re cooking at such low heat.

Which is easier to clean?

The ceramic pot and lid are also removeable and dish-washer safe.

Which is best for me: The Instant Pot or the Crock Pot?

Personally, I use my Instant Pot more than my Crock Pot. I guess you could say I’m a convert.

I still use my Crock Pot for entertaining or if I’m going to be away from the house all day (and if I’m on top of things enough to remember to prep in the morning!). But I only pull it out once a month or so.

My Instant Pot? I use it several times a week — it sits on my kitchen counter just waiting for me to cook something yummy and fast.

Let’s recap the pros and cons, though, so you can make your own decision.

If it were up to me, I would convince you to buy an Instant Pot. But realistically, I know they’re not necessarily for everyone.

You should buy an Instant Pot if…

You should buy a Crock Pot if…

Which model of the Instant Pot should I buy?

If you have 6 or more people in your family or you feed a lot of large groups, I recommend the Duo60 8 Qt. 7-in-1.  You can check it out on Amazon here. That’s the model that I own, and I love having the bigger size for when we invite people over and even for my family of 6.

Which model of the Crock Pot should I buy?

This Hamilton Beach slow cooker is what I own, and I’ve used it for a long time. It’s an 8 quart, and so it’s great for big families or groups. I use it at our annual family reunion to make chili or soup.

But you really can’t go wrong with a Crock Pot brand slow cooker either. Here are the highest-rated Crock Pots on Amazon.

Both Instant Pots and Crock Pots are great time-savers, so you can’t go wrong with either one. Do you own one? Which do you like better?

Instant Pot Vs. Crock-pot: Which One is Best?