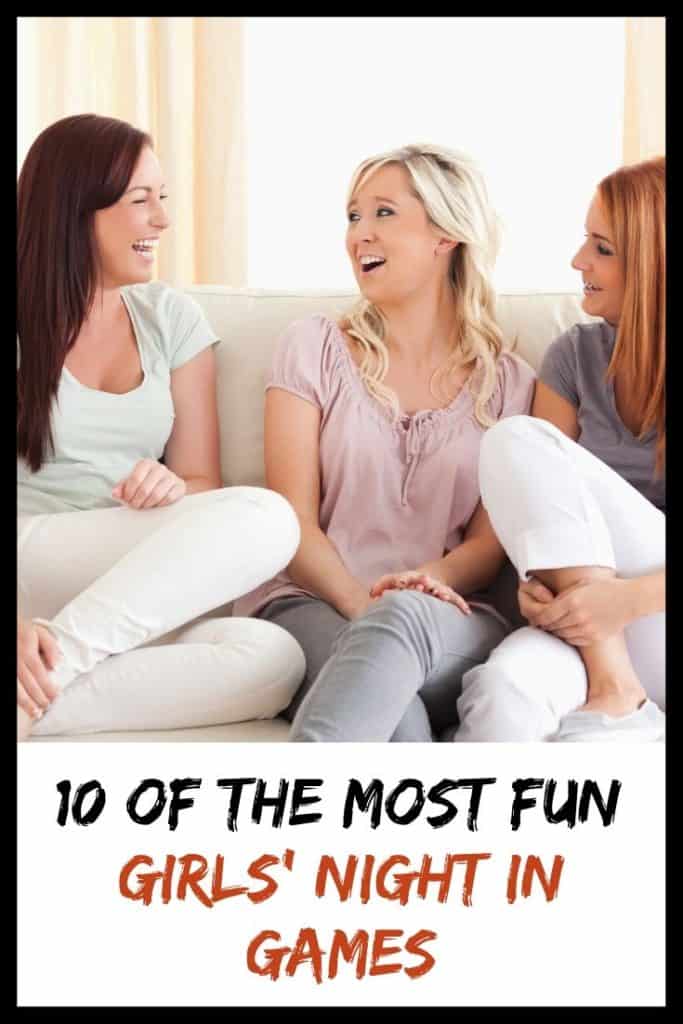 When I think of the most fun I’ve had with friends during a Girls’ Night In, it always revolves around games. Games are a fun way to interact and to find out a lot about your friends. Who’s the most competitive? The loudest? The funniest? People’s true personalities tend to come out when you play games together. They’re my absolute favorite way to spend an evening with friends.

And that’s why today I’m sharing 10 of the most fun women’s party games that you can play with your friends. Let’s check them out!

This post contains affiliate links which means that if you make a purchase through one of these links, I could earn a small commission at no extra cost to you. Check out my privacy policy for more info.

Pit is a great classic party game for 3-8 players that’s fast-paced, competitive, and fun to play. It’s also easy to explain to newcomers as all you have to do is try to trade your cards with other players until you have a set (you do this loudly, by yelling the number of cards you’re trying to trade). Once you have one, you hit the bell, and win that round! If you get the Bear, you lose points at the end. Simple and a lot of fun.

I’ve played Game of Things with both a group of girlfriends and my family, and it’s a lot of fun both ways. You are given a category, like “Things You Shouldn’t Do at a Wedding,” and everyone writes down a response. Then, you try to decide who wrote what. It’s a great game to play to get to know people or to play with close friends. For 4 or more players.

My niece introduced this game to us several years ago, and it produced a lot of laughs for my family. It’s basically the game of “Telephone” in pictures. Each person gets a word that they have to illustrate, the person to the left of them has to write down their guess of what the word is, the next person has to draw a picture for that word (without seeing the original picture), and so on until the picture returns to the original illustrator. The pictures and guesses that come up are hilarious! It’s best played with people who can laugh at themselves (and their drawing skills). The game comes in 6 player, 8 player, and 12 player sets.

For 2-6 players, Ticket to Ride is one of my favorite strategy games. While it takes a little more thinking than the other games on this list, the concept is easy to understand. You draw train cards that give you routes across North America, and you have to race the other players to get to your cities before they take your route or get to their cities first. Over 4,000 5-star reviews on Amazon can’t be wrong!

I haven’t gotten to play Codenames yet, but a friend of mine raves about it and it gets over 2500 5-star reviews on Amazon. To play the game, two rival spymasters know the identities of 25 spies, and the people on their teams have to guess their team’s identities based on one-word clues the spymasters give them. You can read a better description here, but it sounds like a blast. I’m all about spies, and I don’t know many people who aren’t.

Say Anything is a little similar to Game of Things, only in this 3-8 player game, someone reads a question, everyone writes a response, and the person whose turn it is secretly decides which answer is her favorite. Then, everyone tries to guess which answer she chose. It’s most fun played with good friends.

5 Second Rule gives you only — you guessed it — 5 seconds to name 3 things in one category like “3 breeds of dogs” or “3 things you shouldn’t do in a doctor’s office.” Under the pressure of the timer, people say ridiculous things, making it a super fun game. It’s easy to just play a few rounds, too, if you want a short game that packs a punch. For 3 or more players.

I’m a sucker for music games, and this one sounds like a lot of fun! You don’t have to be a singer to enjoy this game. Someone gives you a word, and you have 15 seconds to come up with a song that contains that word. Then, as you move around a game board, you complete music challenges. For 4-10 players.

This game is a great one to play with your girlfriends and is a little more personal than Game of Things and Say Anything. The friend in the Hot Seat reads a card, like “What have I done that might have put me on a terrorist watch list?” and everyone writes an answer, pretending to be the person in the Hot Seat. Then, she reads all the responses out loud and everyone has to guess which one is actually hers.

Some of the cards are a little PG, but it’s a fun way to bring out funny stories about each other. For 4-10+ players.

I saved one of my favorites for last. Catch Phrase is a great party game because you have to compete in teams. One person tries to get everyone else on their team to guess a word by describing it without saying any variations of the word. Once it’s guessed, the person next to them (on the other team) grabs the device and tries to get their team to guess the next word on the screen. The only catch is that a timer is beeping the whole time, and when it goes off, whoever is holding the device loses the point. It’s fast-paced, nerve-inducing, and a whole lot of fun.

Whether you’re playing with close friends or friends you want to get to know better, these games are sure to make for a fun evening together. Which ones have you played? Tell me in the comments below.

Check out the other posts in this Girls’ Night In Series: